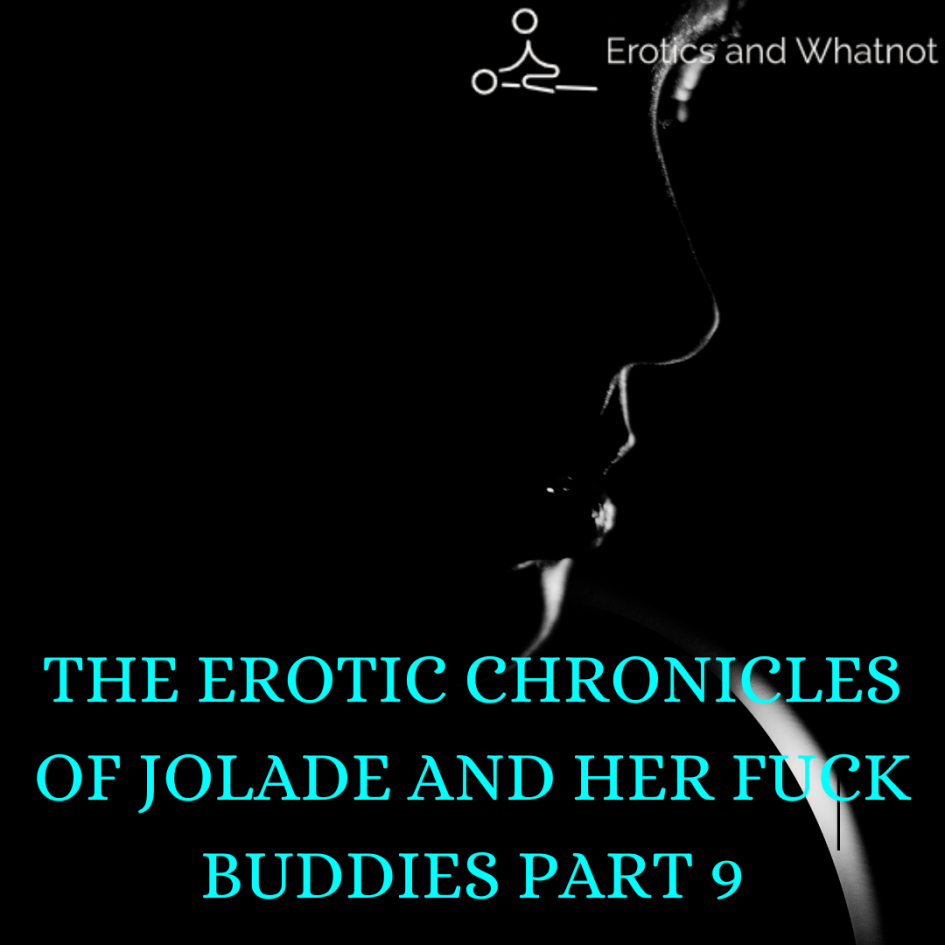 Today we are continuing with Jolade and her fuck buddies; the last episode was steamy, and many people loved the chemistry between Jolade and Ayoola; I loved it too. I can’t wait for more of that chemistry in this episode.

If you want to start the story from part 1, you can do that here.

Before I get into this story, I want to take a moment to appreciate dominant men; you guys rock.

Let’s get into it.

Jolade sat in her bathrobe and slippers pouring coffee into her cup; the scent assailed her nose, it was strong, and she welcomed it. She didn’t sleep enough last night, and she needed as much caffeine as she could get. She picked a piece of toast from the tray the maid had made that morning, and she sat down for her breakfast.

“Bathrobe at the breakfast table? You must think you are in your husband’s house,” the Chief announced as he walked into the dining room.

“My husband’s house, my father’s house, what is the difference?” Jolade smiled; she stood to kiss her father on the cheek.

“You are in a good mood, Jolade,” the Chief said as he took his seat at the head of the table, and Jolade went back to hers.

“Really? I don’t think so. I am just happy to be here that’s all.” Jolade shrugged and carried her cup to her lips.

“Okay,” the Chief squinted at Jolade.

The Chief ate in silence but still stared at Jolade, who tried to avoid his gaze; there was something different with his daughter this morning.

“I need to get going, I have somewhere to be this morning,” Ayoola walked into the dining room and stopped in his tracks.

“Ayoola what are you doing here so early?” the Chief asked Ayoola.

“Hold on,” the Chief held a hand up to Jolade. He eyed Ayoola with his eyes, seeing he was wearing the same clothes as the previous night.

“Ayoola, I am going to ask you this one time. Did you stay the night?” the Chief asked.

“Yes sir, I did,” Ayoola answered.

“Jolade, what is between you and this young man?”

“Daddy, he is my boyfriend and I love him,” Jolade said.

“Ayoola you have the same feelings for my daughter?”

“Carry on,” the Chief said. He left the table and walked out of the dining room.

“Is he going to kill me?” Ayoola asked; he went to Jolade at her seat.

“No, he won’t kill you,” Jolade laughed. “If he wanted, he would have, don’t worry he thinks you are cool,” Jolade smiled at him.

Ayoola stared at Jolade as she smiled, she was beautiful when she smiled, and it made him happy just being in her life.

“Stop it,” Jolade blushed; she stared at the table in front of her.

“Stop what,” Ayoola said. He cupped her face so he could see her beautiful face.

“Stop staring at me that way.” Jolade gushed under his gaze.

“Why would you want me to stop looking at you? I would never stop, you make me so happy, and I don’t want to take my eyes off you for a second. You are so beautiful,” Ayoola said, he spoke softly, and Jolade felt her face go pink.

“I love you,” Ayoola said and leaned in for a kiss.

Jolade kissed him back; she loved feeling this way about him. Ayoola made her feel special.

“I have to go now, I will call you when I get home,” Ayoola broke the kiss.

“I will see you later okay.”

Ayoola walked out of the dining room, leaving Jolade to her breakfast.

Jolade, her brothers and her father are seated at the dinner table. The Chief’s birthday was the next day; the whole family was present.

“So daddy, wait till you see what I got you,” Jolade smiled at the table; she was seated near her father, the favourite child.

“Of course, you have the best gift of all of us,” David said.

“Whose fault is that? Not mine,” Jolade laughed.

“All of you can calm down. I don’t want anything extra tomorrow, I just want to spend the day with my children and a few friends, that is all,” the Chief said.

“Daddy, you have been telling us this for the past week. We understand,” Jolade’s elder brother said.

“Daddy, it will be the best day you ever had. I promise,” Jolade squeezed the Chief’s hand.

“You should invite that boyfriend of yours,” the Chief said, and the table went silent.

“Boyfriend? I didn’t know you and Boluwatife are back together,”  David said.

“No, she has a new boyfriend now. A new man that I like.” the Chief said.

“Jolade, spill the tea please, who is this new man and why did the chief meet him before me?” David asked.

The table sat silent, waiting for Jolade to speak; she didn’t know what to say. She was hoping to keep Ayoola away from everyone for a while.

“His name is Ayoola and we met at a restaurant, at that time I didn’t know he was a son of one of the board members down at the office. He came home to dinner last two weeks and we have been going out since then.”

“That is all?” David narrowed his eyes at Jolade.

“That is all,” Jolade said.

“I’m sure there is more, you would tell me later,” David said.

“You can tell yourselves anything you want but Jolade I want him here tomorrow. He is a good man and I would like to know him more,” the Chief said.

“Okay, I will invite hm. As for the rest of you, please be nice to him,” Jolade announced to the table.

The maid brought in a steaming bowl of Jollof rice, and everyone at the table marvelled at the sight of the food; it was the one trait they all shared that they got from their father; the love of food.

The living room of the Balogun’s residence was packed with guests, friends of the Chief and their families. Jolade and her brothers were on display, children and achievements of Chief Balogun at age 65. Jolade was wearing a large smile as she welcomed the guests into their home, finger foods and glasses of wine were going around the room. Jolade was happy to be introduced to everyone; her daddy made it to 65, so who wouldn’t be happy.

Her mood went higher when Ayoola appeared at the front door, wearing a blue three-piece suit, and he even got a new haircut; his scent drew her to him. A  smile appeared on her face as she welcomed him into her home.

“I was having an okay day, but seeing my beautiful hostess has kicked my feeling into my body,” Ayoola smiled as he wrapped his hand around Jolade’s waist; her body fit him like a glove.

“Take it easy, Mr Ayoola; there are kids around,” Jolade giggled.

“Okay, I will save it for later,” Ayoola released Jolade. He reached for a glass of wine from one of the trays a waiter was passing around. “See you inside.”

The rest of the party went on with everyone giving a speech about the Chief and presenting their gifts to him. Jolade’s brother gave their speeches, and Jolade did too.

“My father is such a dynamic man who has done so much in his life that I don’t know what to talk about. But I know we won’t leave this room for at least a week if I want to talk about everything he has ever done. But you know what I love most about my daddy? It’s that he would support you in anything you want to do, even if he has no idea what you are about to embark on, he will make sure he finds out everything about it just so he can help you. When I was a little girl, my mother died. My father was the one who had to step up and be everything to me. This one time when I was still in the UK, I must have been 7 or 8 and I wanted to take ballet classes, my daddy didn’t know next to nothing about ballet but he wanted to support me so bad that he reached out to people and got me a private ballet dance instructor. He came to all of my recitals, sitting in the crowd cheering; I was so proud of him,” Jolade said; she glanced at her father, who smiled at her.

“Even now as an adult, he is always interested in whatever I am doing , I don’t hide anything from him. He is my strongest confidante, offering me advice even when I feel I don’t need it. I don’t think I could have turned out any better if I didn’t have him with me. So join me in saying happy birthday to my daddy Chief Olusola Ayinde Mustapha Balogun. To many years of achievements and many more years to come,” Jolade raised her glass and the rest of the room raised their glasses too.

“My father is so hardworking even at the age of 65, he is always asking me what is going on at the company he created. Believe it or not, I have to balance the books for my daddy every Friday.” Jolade laughed. “To reward you, I am hereby giving a two month vacation, anywhere you want to go in the world, everything would be made available to you. I want to spoil you in any way I can and yes I am coming with you.” Jolade smiled.

The room erupted in applause, and the chief beamed at his daughter. Ayoola also got to say a speech for the Chief.

“I don’t really know the Chief here but what I have seen from the few weeks since I met him is that he is a man that doesn’t get tired of being supportive. He is always available to lend a helping hand and he has been so supportive of me and his daughter Jolade’s relationship.”

The room clapped as Jolade blushed where she stood.

“His family is beautiful, and the most beautiful of them is his daughter Jolade. I met and fell in love with her, seeing so much of her father in her. She is strong-willed, ambitious and soft. I love her so much, so I have decided to be with her forever. Chief Balogun, here is my gift to you.”

Ayoola unbuttoned his suit to take out a black box; Jolade’s eyes widened as she realized what he was about to do.

“Jolade Elizabeth Balogun,” Ayoola said. He got on one knee and opened the box to reveal a ring.

There was a gasp in the room, and the smile on the Chief’s face couldn’t have been bigger.

“Will you marry me?” Ayoola smiled at Jolade.

The room waited for Jolade’s response, but she was glued to where she stood.

“Jolade answer him,” David whispered behind her.

“No, Ayoola, I can’t marry you. I’m so sorry,” Jolade said and walked out of the room, leaving everyone behind in her wake.

Why did Jolade do that? Do you know why she did that? I don’t, too but if you have an idea, let me know in the comments.

All you have to do is check out the website below; I even hear there is free delivery for orders above $99.