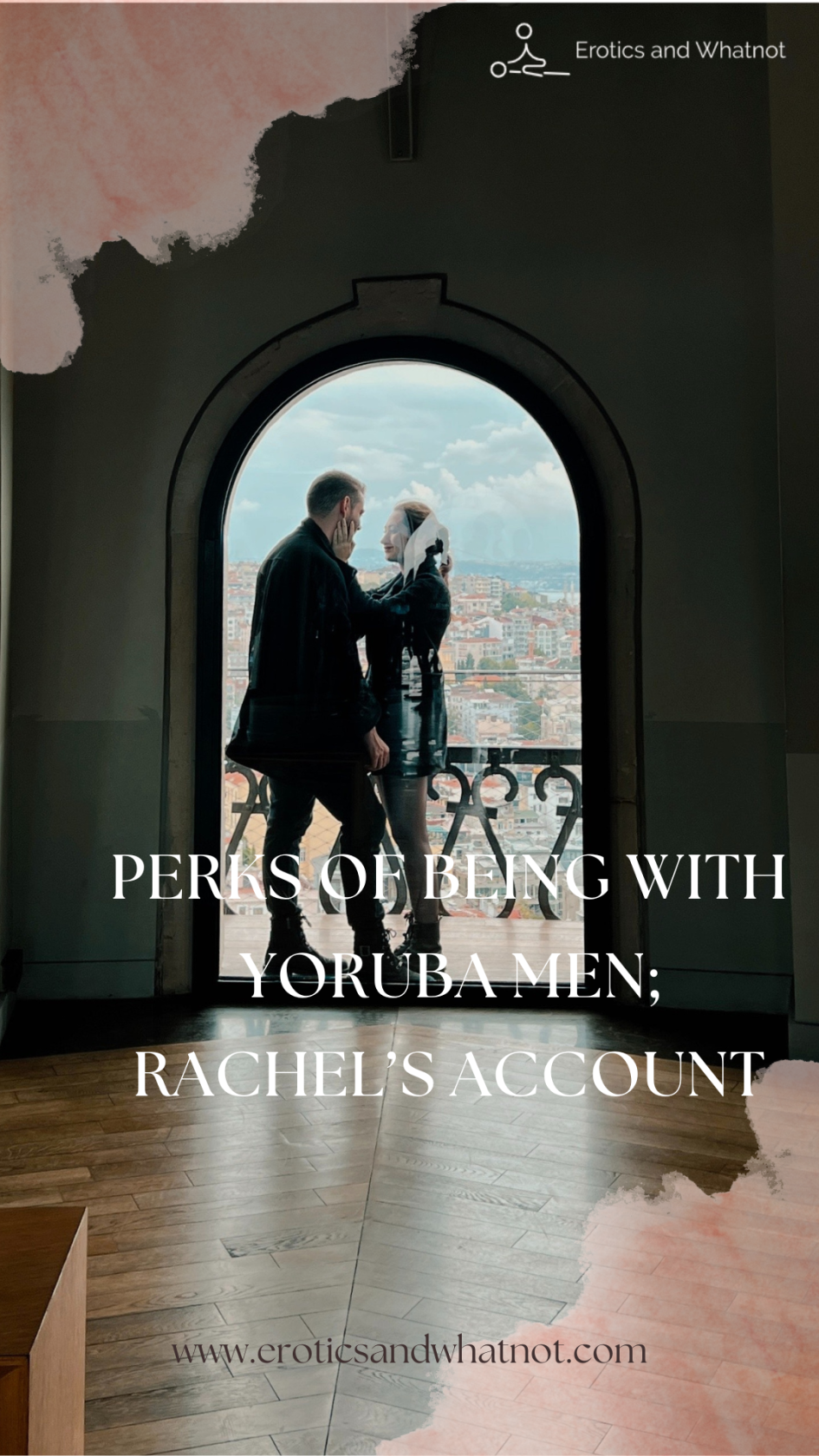 Hi guys, the first post of the year, how are you doing? I am doing great because I have a birthday coming up on Sunday so yay.

We are starting the New Year with a new episode of the story series, this week on Perks of Being with Yoruba Men, Rachel is telling us about her encounter with a Yoruba man. Let us see what she has for us.

By the way, I wish you guys a productive week.

I’m Rachel and I’m in love with a Yoruba man. Pure, sweet, and unyielding. Do you know they tell Yoruba men will hurt you and break your heart? That was the information I had going in and if I had listened, maybe I would not have expressed the softness of the soul that is Yoruba men.

The day I met him was a day I would never forget, it was the first day of NYSC camp.

As the first and only daughter of my father, he went above and beyond for me, I had up to two boxes of clothes and stuff and as a spoiled girl, I had to take my huge ass teddy bear I slept with since I was a little girl. I can still remember my fahther’s advice when I left home.

“It is simple Rachel, go in do what they tell you and come out.”

When my driver dropped me off in front of the camp gate, it was raining and he was not allowed in, I had to carry both bags and risked my teddy getting wet.

I stood under the rain struggling with one box when I saw my second box being lifted, I screamed in the rain thinking I was getting robbed.

I looked up and couldn’t see his face well with the rain and I trusted him to help with my bags, he carried them under a shack and we stood there until the rain went down. I stood there with my teddy in hand shivering all over.

“Are you okay?” he asked, I could see his face now, his face seemed ordinary, a normal, dark-skinned man.

“Sorry,” He said and pulled me over to his side, he wrapped his hands around me as I stared in shock.

Later that day, we had to finish our registration and get our I.D. cards, he helped me through the process even though we were both new there, he helped me find a girl that was in the same hostel as I was so she could help me.

I went to bed that night smiling as I thought about him, how could someone be that nice to a complete stranger?

I didn’t see him for the next few days, I was beginning to think I imagined him but I knew he was real.

I saw him again, on the day of our Man’o’war training. By the time I finished the obstacle course, he was standing at the end, waiting for me.

“I was wondering when you would show up again,” I said.

“I didn’t think you would remember me,” he said smiling at me.

“Nice to meet you too Rachel.”

The next few days were spent on the moon, we spent our days together and even our nights together, it was truly magical. I did not care about anything else or anyone else, it was just him.

But one day, something happened that changed the trajectory of our love. It was the day of the carnivals, his platoon won the overall best in the camp and he was so excited when he came to meet me that evening at our spot. He looked so happy and I was glad.

The first thing he did was give me a long ass kiss, I gasped when he was done, that was the first time he actually kissed me after days of me trying to get him to kiss me.

“Whoa,” I gasped when he released me. “I was not expecting that today.”

He smiled and stared at me in a way he never did, I felt my legs give way. “You are so beautiful Rachel.”

“What’s wrong? Why are you staring like that?” I whispered, afraid of what he was going to say next.

“Come here,” he barely whispered and descended on my lips again.

This time I let myself go in his mouth and allow him to take control of the situation. He was soft and tender and caressed my butt in a way it has not been touched.

Being in his arms was ethereal and I wanted him to keep them folded around me, I smiled inside as he held me, I really wanted nothing more.

When he grabbed my breast, my body welcomed his touch, my breast fit in his hand and his squeeze was so gentle I almost cried. My nipple rose in command to his touch and he tugged on them.

“I want you now Rachel,” he growled.

I did not notice if we would be caught, I just needed him. He laid me on the bare ground and slid off my khaki pants to my knees, the wind greeted my thighs followed by his tongue. I whispered his name and allow the wind to carry it to whoever wanted to hear it.

He took off my panties and my bare vagina lay in front of him, I felt his hand go in and held him tighter, he was tormenting me.

I heard his pants come off and my waist was raised as my body received that greatness that was Babatunde’s penis. He looked me straight in the eyes as he penetrated me, I wanted to look away but it was too sweet to let go.

I melted away in his embrace as he went in out of me, the sweetness in my vagina was too much for me so I pulled him close and released myself again in his mouth. I shoved him deeper inside me and cried inside his mouth, my body went mad with hunger.

I gasped and shoved him away to see three soldiers standing in front of us, I scrambled to my feet and wore my pants.

Babatunde wore his pants and tried to beg the soldiers. He brought some money from his pocket and handed it to the first soldier.

“Use this one buy beer boss.” He said.

The first soldier smiled and collected the money then he turned to the other two soldiers. “Bring them to the guard room.”

I screamed and I saw the look on Babatunde’s face turn to one of pure terror as the soldiers pulled us apart.

I cried the whole night knowing I was going to be sent home in the morning and that I might not see Babatunde again after my father was done with me.

Morning came and my fear reached its peak when I saw my father’s car pull into the camp gates and he came out of the car.

“Rachel, what is this I’m hearing,” he shouted when he came out of the car, some of the soldiers saluted him as the military man he was. “You were having sex?”

“Daddy..”  I managed to say before I saw Babatunde heading to the gate with his box.

“Is that the boy?” My father asked and the soldiers nodded. “You bastard.”

I watched helplessly as my father descended on Babatunde with blows, I screamed as the soldiers held me and made me watch the man I loved at the hands of my father.

The events that unfolded after that changed me forever.

That was fun, no? For a moment there, it felt like I was writing someone’s diary entry.  What do you think would happen next?

Rachel still has a lot in store for us so make sure you subscribe to get updates so you can know when the next story drops.

See you next week.