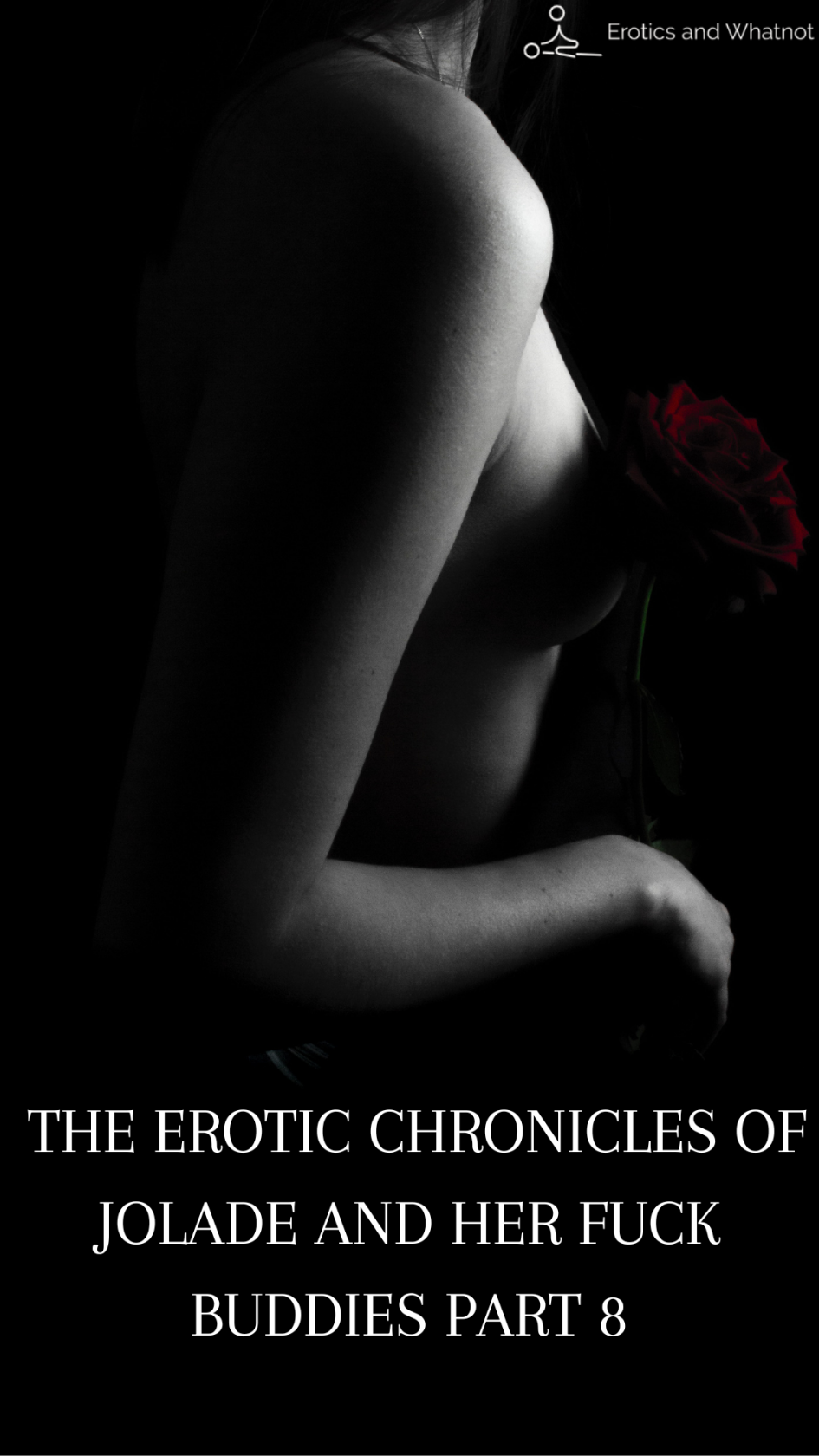 Hi guys, it has been forever; I missed you so much. I couldn’t upload posts during Ramadan, but I’m back now. I’m back now; I hope my Muslim audience had a fulfilling Ramadan and a lovely Eid. I hope everyone is okay.

I am back with another episode of our favourite woman on the blog; Jolade. Who remembers what happened in the last part? If you don’t, you need to reread it then. If this is your time hearing about Jolade, you should start the series to catch up.

Now that we are settled let’s dive into the story.

Jolade sat in her room waiting for Ayoola to be done talking to her father; if Ayoola didn’t finish soon, she would eventually die from the fire spreading through her legs.

Where the hell is this human? Jolade rubbed her arms; her body ached for the young man taking his sweet time.

A knock on the door; Jolade turned towards the door, “Ayoola, you know what to do,” Jolade said.

“How would I know? This is my first time being here,” Ayoola said at the door.

Jolade walked to open the door; Ayoola took her breathe every time she saw him; she was in love with this person.

“So ma’am, I am here to do bad things to you,” Ayoola smirked.

“Well come in, you can’t do bad things to me at the door,” Jolade opened the door further.

“Well actually I can but the Chief will have my head if he saw us.”

“Not just your head, he will display your body outside for men to see,” Jolade giggled.

“God, you are so beautiful,” Ayoola stared at Jolade.

She caught his eyes and maintained the gaze; it felt like she was naked, the want in her legs started to dissolve, and she feared Ayoola would hear her dripping.

Ayoola stepped into the room; Jolade gulped as she closed the door; God help her and her vagina tonight.

Ayoola sat at her table, so she went ahead to sit on her bed.

“I would think you would lunge at me with the way you acted in the kitchen. But here you are; shy as hell.”

“I don’t think I have the strength to lunge at you right now, I think my legs will give way and I will fall before I even reach you.” Jolade smiled.

“I know what you mean,” Ayoola smiled. He went to sit beside her on the bed. “I do not promise to be gentle Jolade, I know this is the first time we would be having sex but I don’t care. I thought about your body throughout the meeting with the Chief and I can’t wait to tear you apart from the inside,” Ayoola whispered against her neck.

“Well, Ayoola,” Jolade said, trying to muster courage like her vagina wasn’t turning to jelly. “You can do whatever you want to me.”

“Good, now take off your clothes.”

It wasn’t a request, it was a command, and a tingle ran through Jolade. She took off her clothes without any protest while Ayoola stared at her.

When Jolade was done, she stepped in front of him naked while he gawked at her body.

“You are beautiful Jolade, I love you so much,” Ayoola said. “Come here.”

Jolade moved toward him as if she was in a trance.

“I want to pleasure you in ways that will make you shake,” Ayoola said as he cupped her face.

“Me too,” Jolade whispered. What is this person doing to me?

“Don’t be silly Jolade. I am here to pleasure you alone; you don’t have to do anything to me. So just relax.”

Ayoola gave Jolade a gentle push on the bed; he laid her back on the bed and spread her legs apart. He smiled at the view; Jolade was wet, and her panties were soaked.

“The safe word is peanuts because I won’t stop until I’m satisfied.”

A safeword? I’m in trouble. Jolade thought. She managed to nod at Ayoola, whose head was already between her legs.

The first sensation felt like her body was exposed to a naked wire, Ayoola’s tongue touched her panties, and she yelped. His tongue felt like magic, and she felt like giving in immediately.

Ayoola tasted Jolade’s juices, and his senses were heightened; he wanted to stick the panties in his mouth and suck her juices out, but tonight, he will be sucking the juices out of her dripping wet pussy. He slid her panties off; he wanted to build that anticipation in her.

He held her hands to pin her on the bed and started to eat out her pussy; he worked his mouth over it as he sucked the skin around it and used his tongue to tease her.

Jesus, help me today. I might faint from all this. Jolade thought as Ayoola pleasured her; she moaned and writhed in his hands; he made good on his word, he was indeed going to tear her apart.

Ayoola raised Jolade’s waist and continued feasting on her pussy; it was an all you can eat buffet, and damn if he didn’t eat it all. He could feel himself losing feeling in his jaw, but what kind of a man was he if he didn’t give Jolade leg spasms.

Ayoola smiled as she started to screech, her juices started to pour into his mouth, and he opened it wide to swallow. She jolted in his arms, but he didn’t stop giving her the pleasure she deserved.

Jolade emptied her juices into Ayoola’s mouth and started to shake where she lay; her body was vibrating as the orgasm washed over her.

“That is the next thing on the menu, ma’am”, Ayoola chuckled.

He got up and got naked, revealing his erected cock.

Jolade gulped, seeing the sheer size of it. This must be that toxic dick Lagos women are always rambling about; God help me, please.

Jade closed her eyes, expecting the impact of Ayoola’s cock inside her; she was already tingling with anticipation.

“Open your eyes, I want you to see me fucking you,” Ayoola said.

He held down her waist to penetrate her; she let out a gasp as Ayoola’s cock entered her body; it was large, and it filled her immediately. She held on to the sheets gasping Ayoola’s name.

I want you to see me fucking you? Is he crazy? Does he want me to die?

Jolade’s pussy felt like home to Ayoola; it fit his cock perfectly, he was free to do whatever he wanted to her, and he intended to make it his home.

Ayoola plundered Jolade’s pussy, and Jolade gave a sharp cry with his stroke; each stroke was different and more intense than the last; it was like he was performing magic on her pussy; she had never been fucked like that before.

“Where did you learn to do that?” Jolade gasped as he pounded her pussy into a pulp.

He performed maneuvers on Jolade’s pussy that only made her scream further.

“Ayoola,” Jolade gasped. “Did the devil mould your penis?” she asked.

“What happened, am I hurting you?”

“No you are not. Your penis is too sweet that I want to prolong the enjoyment as much as I can.”

“You can continue now, take your time,” Jolade smiled.

Ayoola penetrated her again; Jolade felt that familiar sensation in her pussy; she was getting stretched good. She relaxed this time; it was too sweet for her to be tensed. Ayoola went in and out until Jolade jerked violently in his hands, she creamed all over his penis, and he didn’t stop until he released his thick nectar inside her body.

He lay beside her when he was done; he was too good at this.

“So, do you think the Chief heard us?” Ayoola asked.

He wasn’t gasping or out of breath.

“Yes, he surely heard us. I think the whole house heard us. I’m sure my daddy is in his room crying right now because he heard his baby girl get pounded,” Jolade joked.

“I better leave before he sees me and kill me,” Ayoola said.

“You are not going home tonight.”

“Oh really?” Ayoola wrapped his hands around Jolade. “What are you thinking?”

“Oh nothing, I would like to be held by the man I love.”

“Maybe a little hot fuck by the side,” Jolade giggled. She buried her head in Ayoola’s neck.

“You silly potato,” Ayoola laughed and kissed her forehead.

Ayoola held her for most of the night; he felt at peace; Jolade was his home, and the sight of her sleeping in his arms was glorious. He found his person; he knew she was the one when she woke him around 2:00 am for another round of back alignment.

Good God, we have waited so long for these two to have sex, and finally, we have it. Did it go the way you imagined it would? Let me know in the comments. I am open to suggestions in the upcoming parts, so shoot me a mail at Sameerah@eroticsandwhatnot.com or head to the Contact page. I will be looking forward to hearing from you.