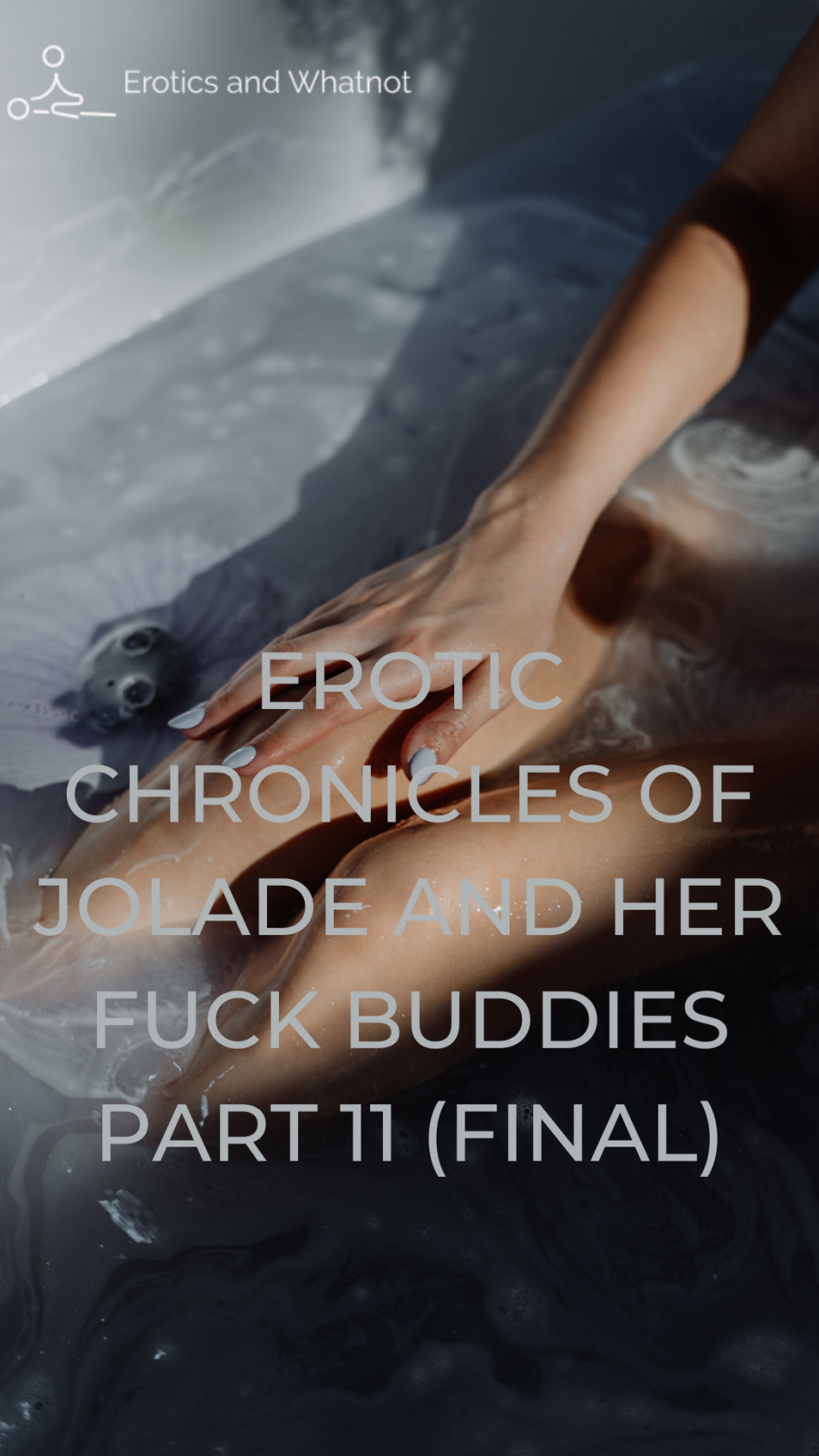 Hi guys, how are you doing? I hope you are well. Are you reading and taking care of your mental health? *sip tea and scratches cornrows.

So today, we have arrived at the last part of Jolade’s story; you guyssss, it has been such a journey with Jolade; we have watched her cry and get heartbroken while getting multiple orgasms until she found love in the arms of the Ayoola.

If you want to start the series from the beginning, you can do that here. Also, can you guess the title of the next series? Let me know what in the comments.

Now we have to say goodbye to this beautiful woman who has charmed our hearts and has made us glued to the pages. Jolade evolved from a woman I started writing about in the waiting room of my brother’s boarding room while wondering if anyone else could see the filth I was pouring out.

Jolade has evolved into an actual character now; I now see her living and breathing in my head, it is time for the grand finale, and it will be a short read.

I hope you all enjoy her last story and are happy at the end.

They took a trip; it was Ayoola’s idea to take Jolade away from the stress she was facing at work lately. She needed a break, and he knew just where to take her. The blue domes of Santorini Island. The water would do her some good.

She slept through the flight while Ayoola stared at her face; he couldn’t believe she was his; even though she refused his proposal, he would propose a billion times until she said yes; that was how much he wanted to be in her life.

He had already called the hotel manager; champagne and chocolate were waiting for her in the room when they arrived. He had a whole itinerary of plans for them, and for her especially. She was his special woman. Nobody deserved special treatment than her.

By evening, they were in their hotel with Jolade sipping on the wine, smiling and trying to avoid Ayoola’s eyes.

“Is this your first time?” Ayoola smirked as he went towards her on the bed, she was so shy, and it was cute.

“My first time doing what?” Jolade sipped more wine. Stable, I need to be stable.

“Your first time with a man on a vacation?” Ayoola smiled and touched her neck with his fingertips. He felt her neck hairs stand; he chuckled under his breath.

“No, it is no, actually,” Jolade said, gulping more wine.

“Then why are you shaky and all shy?”

“I have been with men but it is was normal escapades, we fucked, partied and drank enough alcohol to forget what we did. This is my first time with a man I love,” Jolade smiled.

“So what is there to be shy about?”

“I don’t know how I am supposed to act. What do I do?” Jolade groaned and threw her head back.

Ayoola leaned back into the bed, letting out a hearty laugh.

“What is so funny?” Jolade said and playfully hit Ayoola’s thighs.

“You are so cute,” Ayoola said, enveloping Jolade’s lips with her.

The kiss was gentle, not rushed; he wanted to take his time. He nibbled on her lips as she parted her mouth, trusting him to be gentle with her. She sighed and threw herself into him.

Ayoola caught her tongue in his and sucked; it felt warm and like home.

“Come, I want to make love to you for the first time,” Ayoola whispered against her neck.

“We have made love before,” Jolade whispered, breathing against his neck.

“No, we have fucked before. I want to make love to you the right way,” Ayoola whispered again.

He left the bed and dragged her toward the bathroom.

“Ayo, what are you doing?” Jolade giggled.

He opened the bathroom and pulled her inside, shutting the door behind them. She yelped when she saw it.

The bathtub was covered with roses, and there was more champagne and chocolates by the tub.

“I told you, I want you to be relaxed on this trip.” Ayoola said.

“Oh this human,” Jolade sighed and rested against Ayoola.

He faced her and cupped her face to stare into her eyes.

“I want to love you in ways you never dreamed of.”

He kissed her passionately as he grabbed and pulled her towards him, and her hands went to his face; she needed to hold onto him. He sucked on her lips and heard her moan his name. He started to pull her with him till he got to the tub.

He took off her clothes as she stood quiet, unable to talk. He made sure to kiss every part of her as he unclothed her.

Ayoola helped Jolade get into the tub as he kissed her; he took his clothes off and got in with her.

He eased into her body as she “mmed” her way into his body. Their bodies fit; they were indeed made for each other. This wasn’t going to be rough; it would be soft, tender sex.

Ayoola held Jolade as she slipped his penis into her body; he stared into her eyes as he penetrated her; he wanted to keep looking at her expression as he released himself into her.

Jolade’s hands went for his back as she moaned while Ayoola took her softly; she felt his penis inside her stomach, gently grinding against her vagina walls. She moaned lightly as a fire spread between her legs.

Ayoola grunted as he filled her body, his head with images of Jolade, and held himself from going faster and harder on her vagina.

Jolade’s moans became louder as she felt her body shake with pleasure; she held him closer while still staring into her eyes, he wanted to see, and he must see what he was doing to her.

Ayoola kept going, her vagina was sweet, and it called his name for him to keep going, but he was approaching his limit; lovemaking was so sweet, it drove him to madness.

He grunted as he felt his world about to explode; Jolade felt it too and wrapped her legs around him.

“It is okay, keep going,” she whispered into his ears.

He used the last of his strength to push on until he exploded with a cry and a shudder. Jolade struggled to breathe as Ayoola collapsed beside her in the tub.

“I never made love that way before,” He gasped.

“Me too,” Jolade said, finding her way to his neck.

“I love you, Jolade Balogun, so much,” Ayoola put his hands around her.

“I love you too,” Jolade smiled. “Is this how it will be from now on?”

“Yes, because I don’t have plans of going anywhere.” Ayoola said.

“Not even to dinner?” Jolade raised a brow at him.

“Okay, to dinner but after that, no more,” Ayoola said and laughed.

Well, we have come to the end of the series; I am teary because this is like I am letting a part of me go. I guess it is time to say “see you later” to Jolade.

This is where I sign off for this week; I am proud of you if you have read this far.

You can subscribe if you want newsletters twice a week and birthday emails. You can send me ideas or any material you have to submit to the blog by emailing Sameerah@eroticsandwhatnot.com or contacting me here.

© 2022 Erotics and Whatnot — Powered by WordPress